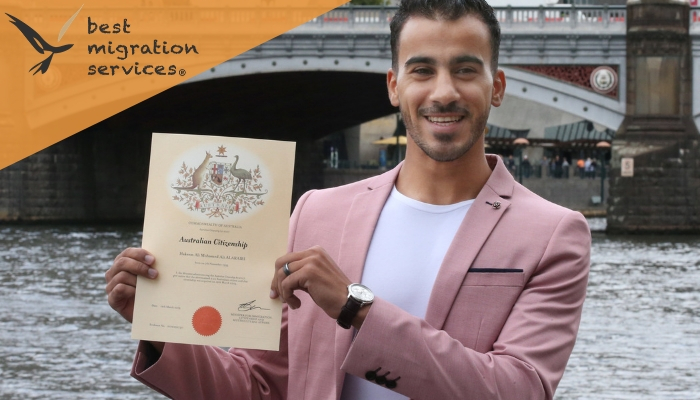 Refugee footballer Hakeem Al-Araibi, who was detained in Thailand while on his honeymoon, has become an Australian citizen in a ceremony at Melbourne.

The Bahrain-born 25-year-old has travelled a rocky road, including a stint in a Bangkok jail, to realise his dream of a life in Australia, which was confirmed on Tuesday.

After passing his citizenship test with flying colours, the star soccer defender was formally recognised as an Australian during a ceremony at Federation Square.

He was among more than 200 people from 44 countries who took the citizenship oath.

Mr Al-Araibi hoped to get back to playing for Pascoe Vale Football Club in a semi-professional league, but was aiming for the A-League and even the national team.

“I want to focus on soccer for this country,” he said.

He was also humbled by support from Australians for his return and thanked them and Prime Minister Scott Morrison, former Socceroo Craig Foster and Foreign Affairs Minister Marise Payne.

They had made him strong and helped him return home, he said.

Mr Morrison welcomed the footballer as an Australian and gave him a small memento to celebrate.

The prime minister took off his Australia flag badge and pinned it onto Mr Al-Araibi’s jacket.

“You can wear very proudly as our newest Australian,” Mr Morrison said.

Senator Payne and Mr Foster attended the ceremony, noting Mr Al-Araibi’s detention in Thailand at the request of Bahrain over allegations he damaged a police station.

“It’s surreal in some ways to think that not too long ago, he was in prison fatigues sitting behind a perspex window,” Mr Foster said.

He said Mr Al-Araibi got a 100 per cent mark on his citizenship test several weeks ago and was looking forward to contributing to his new country.

“We want to see you pulling on the green and gold,” Mr Foster said.

Mr Al-Araibi sat in the front row as the foreign minister addressed the ceremony.

“Across the Australian community, we were concerned for his welfare,” Ms Payne said of his detention.

“I was very proud to witness that campaign. It embodied some of the best elements of Australia: looking after one another, mateship, a fair go,” she said.

She said all new citizens would be granted the same rights and responsibilities, and it was a “thrill” they had chosen to make Australia home.