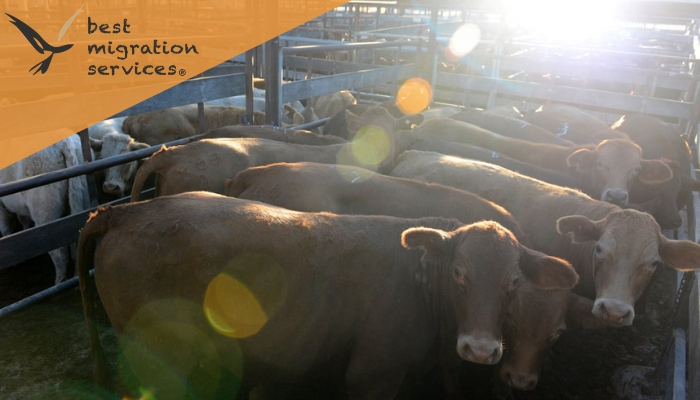 Beef workers are included by the Coalition in the regional occupation list, which allows employers to sponsor overseas workers to live and work in Australia for up to four years in a specified region.

Australia’s visa rules have been relaxed to make it easier for farmers to hire skilled workers.

Farmers have described the changes as a good first step but warned they are unlikely to dampen calls from the sector for a separate agricultural visa because labour shortages are mainly in lower skilled harvesting roles.

On Monday the immigration minister, David Coleman, announced that 18 occupations would be added to the regional occupation list, which allows employers to sponsor overseas workers to live and work in Australia for up to four years in a specified region.

‘I understand what it takes’: McCormack swipes at Joyce on successful marriage
Read more
The occupations added to the list include livestock, beef, dairy, sheep, aquaculture and crop farmers, as well as non-agricultural roles such as dentists and anaesthetists.

“This update responds to calls from regional Australia for better access to skilled workers in key areas of need and will boost access to services required by our local communities,” Coleman said. “We want Australians filling Australian jobs but when this isn’t possible action is needed to ensure farmers can continue to operate.”

Eight occupations – including footballer and tennis coach – were added to the medium and long-term strategic skills list, which grants people a path to residency and a four-year stay, rather than two years.

Paul Shoker, a board member of New South Wales Farmers who grows bananas and avocados in Coffs Harbour, said it was “increasingly difficult to source harvest labour for jobs like picking and packing”.

“Generally, for the higher-skilled jobs where a tertiary education is required there are avenues to seek labour there, whether it’s local or foreign workers,” he said. “The semi-skilled to lower-skilled roles are where most of the stress is and that’s been the case for some time.”

Shoker said labour shortages caused fruit to rot on the vine or be downgraded, increasing prices for consumers.

Asked about Monday’s changes, Shoker said they were “a good first step” but reiterated calls for an agricultural visa to ensure “reliable labour”.

The National Farmers Federation chief executive, Tony Mahar, has said an agricultural visa will ensure workers are legally in Australia and “protect against exploitation”.

A study commissioned by VegetablesWA led by University of South Australia law professor Dr Joanna Howe found that 40% of vegetable growers surveyed have not been able to recruit sufficient pickers, packers and graders at some point in the past five years. Sixty-three per cent reported leaving vegetables unpicked.

In October Scott Morrison insisted the government had not ditched plans for an agriculture visa in the medium to long term after a failed push from the Nationals to get the proposal in place before harvest time.

The agricultural visa proposal faced trenchant resistance from senior Liberals worried that the proposal would cause friction in the Pacific at a time when China was intent on flexing its muscle in the region.

Last week the assistant agriculture minister, Richard Colbeck, poured cold water on the idea of a separate agricultural visa, telling reporters in Canberra he did not think it “in itself actually works”.

“Quite frankly you’re doing a disservice by narrowing it down to just an ag visa,” he said.

Colbeck suggested the visa may not be necessary, citing changes made in November extending the Pacific labour scheme and relaxing rules to allow backpackers longer stays in the country if they worked on farms.