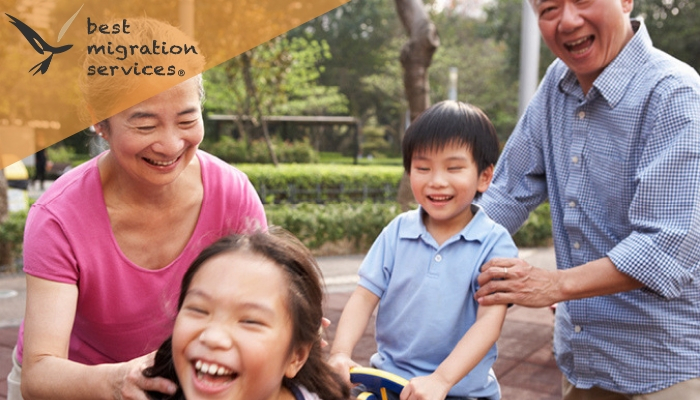 On 1 March 2019, Minister Coleman announced that applications to sponsor a parent for a Sponsored Parent (Temporary) visa will be open from 17 April 2019.

Once a sponsorship application has been approved, a sponsored parent will be able to apply for a Sponsored Parent (Temporary) visa. Applications for the visa are intended to open from 1 July 2019

The visa provides parents with a new pathway to temporarily reunite with their children and grandchildren in Australia, while ensuring that taxpayers are not required to cover additional costs. The visa responds to community concerns about the limited number of Parent places in the migration program and associated lengthy waiting periods.

To be eligible for the visa, a parent must be the biological, adoptive, or step-parent of the sponsor, who must be an Australian citizen, Australian permanent resident, or eligible New Zealand citizen.

The following information is subject to introduction of supporting regulations.

The visa provides parents with a new pathway to temporarily reunite with their children and grandchildren in Australia, while ensuring that taxpayers are not required to cover additional costs. The visa responds to community concerns about the limited number of Parent places in the migration program and associated lengthy waiting periods.

To be eligible for the visa, a parent must be the biological, adoptive, or step-parent of the sponsor, who must be an Australian citizen, Australian permanent resident, or eligible New Zealand citizen.

Sponsorship and visa applications must be lodged online through ImmiAccount.

Benefits of the new pathway

The visa allows parents to remain in Australia for a longer period of time, up to five years at a time without departing. It provides an alternative option to Visitor visas which only allow shorter periods of stay. Parents are still eligible to apply for Visitor visas and/or permanent Parent visas.

While the Sponsored Parent (Temporary) visa allows for a significantly longer stay period than a visitor visa, it is still only a temporary visa and does not allow for permanent residence in Australia like a permanent Parent visa.

The 15,000 cap has been set by the Government in recognition of the challenges of an ageing population, as well as the overall budget impact of older migrants. The limit also reflects the Government’s priority of providing visa pathways for children and partners of Australians, as well as the need to target young skilled migrants to maximise the economic benefits of migration.

If the cap is reached in a program year, no further visas will be granted until the next program year commences on 1 July.

The visa and existing pathways

The Sponsored Parent (Temporary) visa provides an additional option for parents of Australian citizens and permanent residents who wish to visit family in Australia for longer periods.

No existing visas are affected by the introduction of the Sponsored Parent (Temporary) visa. Standard Visitor visa arrangements remain unchanged. Parents will continue to be able to apply for a longer stay and longer validity Visitor visa.

Potential applicants are in the best position to determine which visa is most appropriate for their own circumstances, noting that each visa has different requirements, visa application charges, conditions and stay periods.

The information below applies to sponsors of Sponsored Parent (Temporary) visas, not other kinds of sponsors, such as work visa sponsors.

Only two parents per household can be sponsored for this visa at a time. The limit allows more households to sponsor a parent and reflects the potential costs a sponsor will be required to meet.

Sponsors must meet the following criteria:

Sponsors must also agree to comply with sponsorship obligations in relation to the parent(s) they are sponsoring.

A parent sponsor will be required to meet obligations including:

If an obligation is breached, the Department can consider:

If the parent incurs public health debts in Australia and these are not paid, the party owed the debt will be able to pursue the sponsor, through the Courts if necessary, to have the debt repaid.

A parent sponsorship will cease:

However, some sponsor obligations will continue after the sponsorship ceases, including the obligation to pay any outstanding health debts incurred by the visa holder in Australia, even after their visa has ceased.

The sponsorship application fee is $420.

Sponsoring other kinds of visas

Sponsored Parent (Temporary) visa sponsors will also be able to sponsor other types of visa holders if they meet the requirements of that sponsorship (for example a work visa sponsor for a Temporary Skill Shortage visa, or sponsor for a Sponsored Family Visitor visa).

A sponsor can lodge an application to vary their sponsorship which will allow them to sponsor a different (new) parent. The new parent must also be a parent or step-parent of the sponsor or their spouse/partner. If the sponsor already has two sponsored parents, they will need to withdraw their sponsorship for one parent and that parent must either leave Australia or apply for and be granted a different visa before an application for sponsorship variation can be lodged.

Unlike permanent Parent visas, there is no Balance of Family Test requirement for this visa, meaning a visa applicant is not required to have more than half of their children residing in Australia.

How long you can stay

The visa allows parents to stay in Australia temporarily for a period of up to five years at a time. A parent must be outside Australia for at least 90 days before being eligible to apply for a further Sponsored Parent (Temporary) visa. A parent will be able to hold visas up to a total stay in Australia of 10 years, reflecting that the visa is a temporary visa and does not lead to permanent residence.

The visa application charge is:

The visa application charge is payable in two instalments, with one payment at time of application and the remainder paid prior to visa grant.

The visa application charge represents a contribution to the cost of the services parents will use in Australia for extended periods. Most visa holders will have never paid tax in Australia but will benefit from using existing infrastructure.

The charges also reflect that there are benefits for both parents and their Australian families. The visa holder can stay in Australia for up to five years continuously (up to a cumulative maximum of 10 years), thereby saving on the cost of airfares that would be incurred over this period if they were required to depart and re-enter Australia on a regular basis.

Processing times will be dependent on a number of factors, including the number of applications lodged and whether an applicant provides all required information with their application.

Processing times will be on the Department’s website when available.

Visa holders will generally be subject to a “no work” condition.