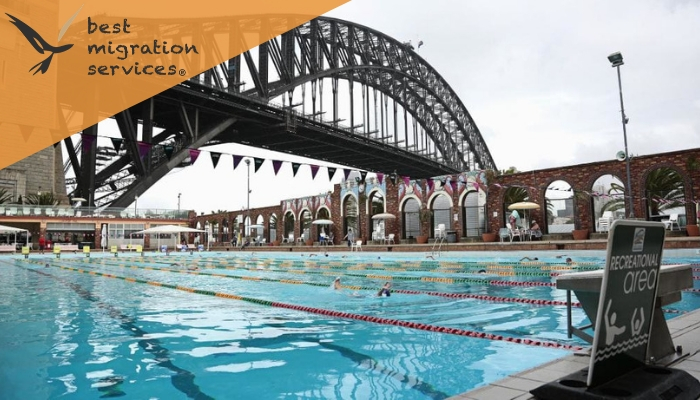 Plans for a $77.6m makeover of North Sydney Olympic Pool

A $77.6 MILLION proposal has been put forward to redevelop North Sydney Olympic Pool.

Six options were originally on the table – costing from $16 million to $72 million – to upgrade the ageing facility.

But now a seventh option has been revealed by North Sydney Council after community consultation.

There would be family friendly facilities, including a splash pad and a water play area, as well as a 51.5m outdoor pool with two booms and a 25m eight-lane indoor pool.

An underground carpark, a landscaped roof, a grandstand, an events space, a hydrotherapy pool, a gym and a new Ripples cafe are also proposed.

But the latest proposal does not include a water slide or international diving facility, unlike some of the other options.

The plan to upgrade the pool has been the subject of debate at the council.

The 50m pool in the complex needs to be upgraded because it has concrete cancer and has reached the end of its life. It is the original shell, dating back to 1936.

At the last council meeting, councillor MaryAnn Beregi successfully moved a motion that the council defer the decision on the next step of the pool’s redevelopment.

The motion received widespread support from other councillors. Mayor Jilly Gibson was the only councillor to vote against it.

A workshop will be held for councillors to ensure that all “relevant information” will be provided.

This includes the history of the pool and projections for up to 75 years.

If necessary, further options for the development of the pool may be commissioned.

The original recommendation put forward by the council would have moved the council closer to the development application stage.

It had compelled the council to decide which of the seven options to put on public exhibition for community feedback.

Cr Beregi told the Mosman Daily she was “unhappy” and “less than impressed” with the whole process of redeveloping the pool.

“I am very concerned that much of the discussion and consultation has been centred around what the current pool users want,” she said.

She pointed out that while current users were part of the consideration, the council was planning a pool for people over the next 100 years.

“It is our role as councillors to make decisions in the best interests of not just the current community but also the future community,” she said.

“The last thing we want to do is close the pool for two years and spend the money, only for the pool to be obsolete before it reopens and not achieve any of the desired outcomes.”

A North Sydney Council spokeswoman would not comment on the opinion of any individual councillor.

“Councillors hold different opinions on many issues,” she said.

Cr Beregi is closely connected to the pool and it was one of the reasons she stood for council.

She was devastated when the diving boards were removed from the pool. She is undecided on the issue and wants further information.

Cr Beregi also pointed out that the pool had changed over the years.

“When I was younger and swimming at the pool, less than half the pool was dedicated to lap swimming – maybe one or two lanes,” she said.

“The rest was recreational swimming and kids jumping off the diving boards.

“It now seems that lap swimming has pushed the fun part out. This is all part of the balancing act that is before the council.”